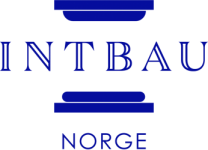 Previous Next
Jozef Pilsudski square – An evaluation of the Municipal Cultural Center of Stalowa Wola in a context of future use and urban layout.

Visiting Stalowa Wola and the MDK building as it is called,  was for us an interesting experience noticing a architecture in social realistic style from the communist period containing some details of Art Deco design.  The building stands in a unique layout surrounded with homogeneous architecture.

The MDK Building.  A Few years back the building has been structurally refurbished with a very good emphasize on the social realistic style and Art Deco interior design and detailing.  This is very well completed.  New doors, staircases and fixed furniture and railings are beautifully done. For the second phase of refurbishing which is underway minor changes in floorplans to suit an extensive use of the building is needed. Also painting, improvement of colour scheme, lighting and some old original doors needs to be replaced in this phase.

The House of Literature in Oslo. As consultants on this second phase regarding refurbishing and use of the building (soft activities) we would set a good example to what has been done here in Oslo.“Litteraturhuset” is a public meeting place for exchange of literature and spreading of culture and The house is situated near the castle in Oslo and is the largest house of literature in Europe.  It serves an extensive number of soft activities and is a good example to follow.The Litteraturhuset Foundation is a national arena for literature, knowledge, debate and education. 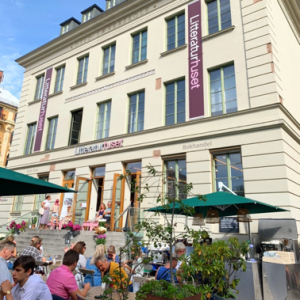 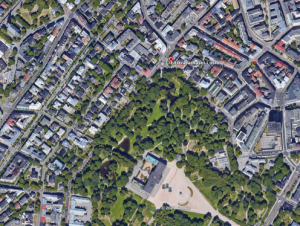 The ”litteraturhuset” is situated at one corner og the palace garden,Norway’s first house of literature opened in the autumn of 2007. The House of Literature has now become a well-known concept and the only national house of literature. It works to spread literature and culture in a broad sense, protect freedom of expression and contribute to a knowledge-based public discourse.

The house has room for many different activities. On the ground floor is the bookstore, café and the main stage, The Wergeland stage. In addition there is  5 different scenes and rooms for conversation, debate and communication. A separate department is set aside for work with children and young people. Through the program for children and young people they are training new generation of readers, regardless of ethnic background and size of the wallet. The café with an outdoor seating area in a nice garden is essential and attracts many visitors due to its central position. MDK  has a similar possibility with its central position.

The town of Stalowa Wola.

For being a complete new town constructed in the 30`ties for industrial purposes it seems very well planned and built, although new buildings in communist period and post communist period have departed more and more from the original intension of the plan for a garden city. The city has developed during recent years without emphasizing on beautiful patios, outdoor corners, benches and squares were people can meet and socialize. Retails areas are also distributed all over the town. A further plan should stimulate for development of good outdoor spaces and integration of such activities.

The city has a great green area and a landscape protection plan for the remaining green areas and gardens is needed in order to show the possibility of implementing new city areas within the spirit of the original garden city plan.  The purpose of such a plan is to protect the integration of greenery with future development.

A master plan for the future development of Stalowa Wola with the purpose to control and guide development of the city in this spirit could take place including collaboration with the population. Using the model of a charrette planning process and also modern use of computer planning, one may achieve  an extensive participation from the population.

A prerequisite for good positive development of soft activities is a good physical environment. We have noticed through workshop on searching for the City Centre of Stalowa Wola which was arranged in 2017 under the moderation of employees of the Technical University of Cracow and Lublin – the Józef Piłsudski square was rated as the most suitable place for future development of a city square in Stalowa Wola. The square is divided by the Sierpina street. There is social housing buildings on the south side and the Arkadia building on the north side. As mentioned earlier good outdoor spaces are essential. The Arkadia building is very suitable as an attraction to the square and may contain cafes, pubs, bookstore and other visitors activities.

In this respect we suggest that the whole concert arena on the south side to be taken down and moved to the other side of the Sierpina street. A concert pavilion with small premises for cafes, shops and tourist activities. Thus the square volume will be enclosed as whole with ”four walls”. To take this thought further we have noticed that the design team Najgebauer Krystian, Przytuła Mateusz, Wędzicha Wojciech, Zabielska Katarzyna proposed a new railway station in the axis of the Józef Piłsudski square with an underground pathway linking up with the commercial area of Okulickiego street.

As illustrated above one could achieve a west/east axis which will link up the MDK building and already established public functions, the Florin Church and the library in the east. Okulickiego street is the most active shopping street and it is likely that additional shopping areas will be developed here in the future. The railway line is currently a spatial barrier, but including a new station with an underground pathway it will enhance such a development and at the same time connect the different city areas.

Mood pictures of the MDK building 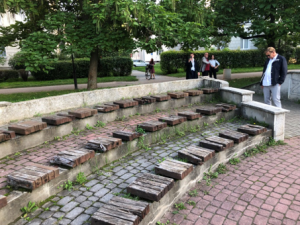 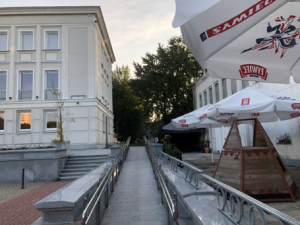 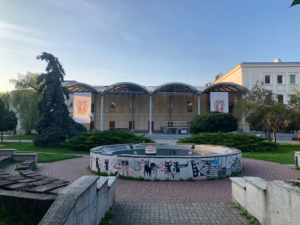 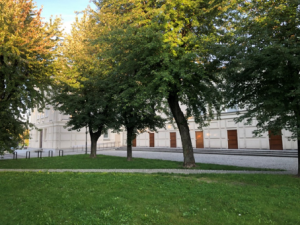 The outdoor arena collides with the classic architecture.   The MDK building is surounded with green areas 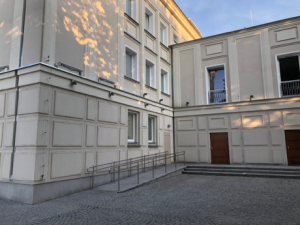 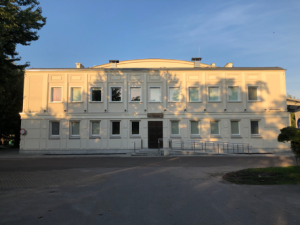 Very well detailing of masonry work and universal access on all sides. 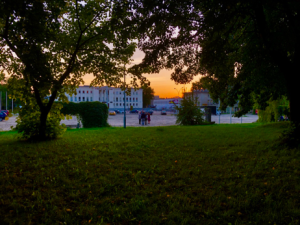 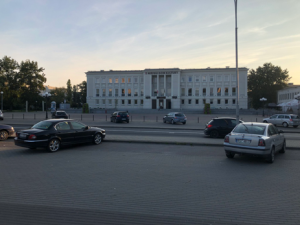 A concert pavilion towards west may take thousand spectators not cars

As a follow up of a landscape protection plan we propose that the photographic workshop especially focuses on the green aspects of the town. We propose to use this material to make an exhibition which emphasize on the greenery of Stalowa Wola and proposals to improve the greenery in new city areas which lacks the quality and atmosphere of the garden city.